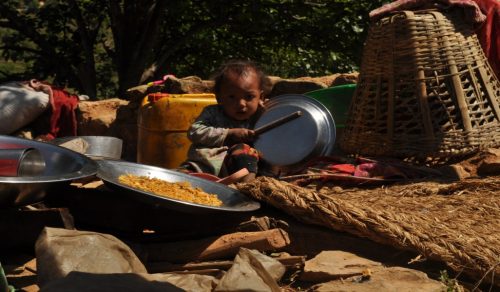 While going on foot, our team came across a many more neglected villages, which were hidden within the Earthquake devastated areas of Southern Lalitpur. We heard the plight of the people of one such village called Nallu, which has a total population of 250(approx) and 78 households. Nallu is located 30 km south of Lalitpur District near Makwanpur border. Most of the people here comprise of poor farming communities. According to the report taken 96.7% people are Tamang and remaining 3.3% are Chhetri.One of the most devastated area is ward no.8, as most of the houses were made of stone and mud, which has partially or completely been destroyed now. People have been living in barns with animals and on farms. So far there is no relief aid from Government. Only Private organizations, like ours, have reached the place and are providing some food and relief supplies.The complaints of the people were the same, that there had been no proper relief aid or any help that had arrived so far. After accessing the damage on their homes, we decided to help them re-build temporary shelters and at the meanwhile set up another free HOT MEAL KITCHEN.

With the support of Dooley intermed foundation,USA, we were able to buy food ration, foam mattresses , medicines, tarpaulins and sanitation materials like soaps, disinfectants and buckets hygiene products to the victims of Nallu. Our team reached Nallu on 6th May 2015, and were able to mobilize the local volunteers, who helped us set up the Kitchen area and a few of them even volunteered to cook and serve at the kitchen. We then brought in cooking pots and pans and supplied enough food rations to last two weeks of free meal system. The kitchen ran successfully for two weeks, free hot meals to the victims twice a day. Morning – 9 am till 11 am and evening dinner from 5:30 pm to 7pm.

Since the population is larger than that of Lele and to run a kitchen up to a week or more. The cost for this project is slightly higher. We have also, distributed, tarpaulins and foam mattresses to the neediest, esp. the elderly and nursing mothers.

Your email address will not be published. Required fields are marked *