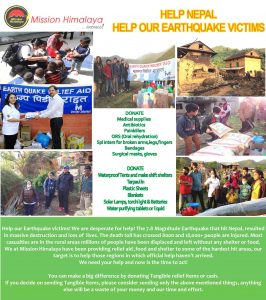 As soon as the April 25th Earthquake struck Nepal, which left over 8000+ people dead and 14 million homeless. Our team at Mission Himalaya has been relentlessly, travelling to remote villages all over Nepal, distributing food rations, medical supplies, tents, tarpaulins and mosquito nets. We have so far been able to distribute relief aid to over 14 villages in 13 districts!
This however, was our Emergency response for the victims relief, which was required immediately following the devastation. Later, we expanded our relief efforts  to long term self sustaining projects,(6 months to 1 year), some of our long term projects for Earthquake relief were: 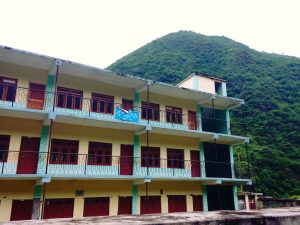 building plans. Out of which, our organization Mission Himalaya, had been selected, to help develop some of the badly affected villages in Gorkha District. Out of the affected, we were assigned three VDCs: Namjung, Fujel and Darbung, where currently thousands of displaced villagers had been re-located, due to constant landslides, triggered by constant aftershocks. With help of our donor agency Dooley Intermed Foundation, we were able to provide more than 50 temporary Learning Shelters (TLC), for Three Villages and 21 local schools, for over 1300 students. These Temporary classrooms were set up immediately, in order to encourage local children to go back to school, so that their education would not be hampered. These shelters are specially designed, which measure 15 ft width, 12 ft height and 25 ft length and are made out of Galvanized tins specially cut for the roofs. Thanks to Dooley, the villages also received tonnes of medicines, brought all the way from the USA by Dooley’s team led by Scott Hamilton(Vice president). Dooley Intermed also helped set up a free medical camp at Darbung VDC in Gorkha, where Dr. Indira kairam M>D from USA, did a free medical check up of around 300 patients in one day. Here Tarpaulins and foam mattresses were also distributed to the victims.

Our team of volunteer doctors and nurses, who set up clinics in some of the most remotest areas of Nepal, continue their efforts , as we help set up such free of cost clinics, with free treatment and medicines. However, this was a limited work due to insufficient funds to buy medicines and unavailability of doctors and nurses all the time. We have so far successfully treated over 700 patients free of cost from remote areas like Nuwakot district, Southern Lalitpur and Gorkha.

The Hot Kitchen project is our idea of a practical but quick Earthquake relief response. Our team from Mission Himalaya, with the help of local volunteers, we have been able to set up “Free-hot-meal” kitchens. We had set up three successful Hygienic Hot kitchens, one in Lele Ward no. 4, another in Nallu Ward no. 8 and the third one in Ghyampe dada, near Chapagaon. These Villages are on the southern outskirts of Lalitpur district along the border of Makwanpur and mostly comprises of poor farming communities. The Ethnic groups are mostly Tamangs and Chettris. And almost all of these areas have received no official help from the authorities, except for a few passing by private donors or organizations.

Our first Hygienic Hot Kitchen for the earthquake victims started from May 1st in Lele Ward no.4, around 72 households and families were living without proper food or shelter outside in the cold in this village. And around 80 households had been affected badly by the Earthquake in Nallu VDC 8.  The idea was not just to provide free hot meals to the affected victims but also to mobilize the local youth and help those who needed support in re-building their homes, shelters. We realized a lot of the victims had to spend extra effort and time, trying to gather food ration and to cook and feed their families. So, this project has helped people find time to focus on rebuilding all that has been destroyed.

With the help of the local volunteers, we were able to bring in clean water supply from a nearby water reservoir tank of 4000 litres. We bought 250 meters of pipe and set up water to the area where we set up the kitchen. We then put in water purifiers and made sure it was safe for drinking. We set up Hot kitchen, which was being run by 5 people, all locals, two were our staffs, who cooked fresh hot meals, day and night for the entire village.
This was set up on May 1st 2015, our city office team provides ration and food items and supply the kitchen with all that is required.

We also distributed Medicines and medical supplies, which was handed over to the Local primary Healthcare center of Lele VDC.

Other items that we distributed to the victims:

While going on foot, our team came across a many more neglected villages, which were  hidden within the Earthquake devastated areas of Southern Lalitpur. We heard the plight of the people of one such village called Nallu, which has a total population of 250(approx) and 78 households. Nallu is located 30 km south of Lalitpur District. Most of the people here comprise of poor farming communities. According to the report taken 96.7% people are Tamang and remaining 3.3% are Chhetri. One of the most devastated area is ward no.8, as most of the houses were made of stone and mud, which has partially or completely been destroyed now. People were living in barns with animals and on farms. There was no relief aid from Government. Only Private organizations, like ours, reached the place and provided some food and relief supplies. The complaints of the people were the same, that there had been no proper relief aid or any help that had arrived. After accessing the damage on their homes, we decided to help them re-build temporary shelters and at the meanwhile set up another free HOT MEAL KITCHEN.

With the support of  Dooley intermed foundation,USA, we were able to buy food  ration, foam mattresses, medicines, tarpaulins and sanitation materials like soaps, disinfectants and buckets hygiene products to the victims of Nallu. Our team reached Nallu on 6th May 2015, and were able to mobilize the local volunteers, who helped us set up the Kitchen area and a few of them even volunteered to cook and serve at the kitchen. We then brought in cooking pots and pans and supplied enough food rations to last two weeks of free meal system. The kitchen ran successfully for two weeks, free hot meals to the victims twice a day. Morning – 9 am till 11 am and evening dinner from 5:30 pm to 7pm.

We also distributed, tarpaulins and foam mattresses to the neediest, esp. the elderly and nursing mothers.

Other items that we distributed to the victims:

Our deepest gratitude to Gary from Bridge Foundation,USA, for his support in helping us establish yet another ‘Hot Kitchen’ Project. Our third successful Hot Kitchen Project was in ‘Ghyampe dada’, a small village hidden in the Southern part of Lalitpur. We focused on this area because of the fact that it lies hidden in a valley where no help had arrived and the other fact being the people here are of low caste and are of extremely poor economic conditions. The entire village comprises of people who earn their living as low labor workers, working in nearby brick kilns, earning less than $5 per day.

Among all the villages, the people of Ghyampe dada were the most helpful. They helped us set up the hot kitchen, by volunteering to cook them and also by bringing in their own pots and lights. They were extremely grateful to us for our support.

How Can You Help us in this project??

OR
Come and Volunteer at our Earthquake Relief and Temporary Learning Shelter projects.

All Images Copyrighted,no use without permission © Karishma Chand Thakur 2016